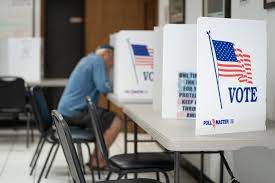 Bitcoin erased gains Monday ahead of the U.S. midterm elections and the expected release of inflation data.

The largest cryptocurrency by market cap was trading for $20,710, down 2.4% in 24 hours, CoinGecko data showed at the time of writing.

It is now only up minimally in the past seven days by 0.5%, losing the gains it made at the weekend when it broke above the $21,000 mark—at one point hitting $21,414—jumping after news of job growth in the U.S.

Ethereum, the second biggest digital asset, is down too: the cryptocurrency has shed 1.3% of its value in 24 hours, and is currently priced at $1,589.

And Dogecoin, the eighth biggest cryptocurrency by market cap, is also struggling. The original “meme coin” and personal favorite of Elon Musk has experienced a 4.7% 24-hour drop—priced at $0.11.

The coin came into November rallying after Elon Musk announced his Twitter acquisition. The cryptocurrency—which was originally created as a joke—at one point was up 94% in a week, making it the best performing digital asset.

U.S. voters tomorrow head to the polls to choose who will make up next year’s Congress. The elections are expected to be important for the crypto world as lawmakers are expected to decide how to regulate the digital asset sphere in the next few years.

And on Thursday, the U.S. Bureau of Labor Statistics consumer price index (CPI) will be released, which shows how high inflation in the American economy is by tracking prices in goods such as gasoline and apparel.

High inflation numbers could mean Bitcoin continues to tumble as investors go to “safe-havens” like the U.S. dollar—which has soared this year—and avoid riskier assets.