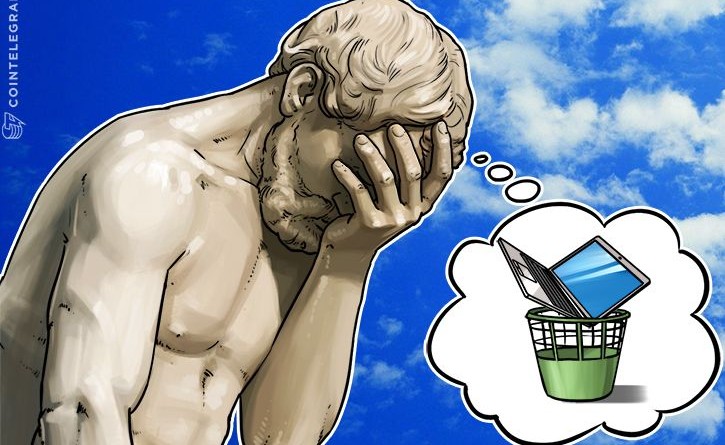 During the summer of 2013, while cleaning out his desk, a Welsh man named James Howells threw away a hard drive from his broken Dell Laptop.

Unfortunately, he realized several months later that the drive held 7,500 Bitcoin mined back in 2009. At the time, with Bitcoin approaching and finally just exceeding $1,000 in price, the scrapped hard drive would have been worth over $7 mln.

The story created a lot of hype about the rising the value of Bitcoin and the fortunes – or misfortunes – of the currency’s first miners and investors. Many of them had dabbled with the currency while it was in its infancy, only to forget about it and fail to backup their wallets.

Howells, who essentially dumped $7.5 mln (£4 mln) onto a landfill in Newport, Wales was of course furious, disappointed and dumbstruck. Over the next few years, he may have come to terms with his loss, only to have old wounds reopened as the currency began its long climb this year. At press time, Bitcoin’s price stands at $10,700, giving that trashed hard drive a value of over $80 mln.

‘That’s a bad idea’
Howell had mined those 7,500 coins himself as a hobby back when Bitcoin was a mere plaything for the technologically inclined. Howells related:

“You know when you put something in the bin, and in your head, say to yourself ‘that’s a bad idea’? I really did have that.”

Howells explains how he stopped mining when his girlfriend complained about the noise from the laptop and the heat it was producing. When he spilled lemonade on the laptop the following year, he dismantled it for parts. He initially kept the hard drive for a few years before finally discarding it.

“I’m at the point where it’s either laugh about it or cry about it. Why aren’t I out there with a shovel now? I think I’m just resigned to never being able to find it.”

Once can only imagine how the unfortunate Howells feels today.

Howells isn’t the only person to experience the pain of such financial loss. An Australian man, who wishes to remain anonymous for fear of the wrath of his wife, has also come forward with a tale of thousands of missing Bitcoin.

Alex, as he wants to be called, describes how in 2009 he mined “thousands, plural” of Bitcoin as part of a novel new idea. Then when the program for mining got a little too big and cumbersome, he gave up, deleted the program, and stashed his Bitcoin on a cheap USB. He said:

“The thinking was that it’s offline, not on my PC, so in case something bad happened to the PC — [if] it blew up, or [was] hacked — I still had a backup.”

Around the end of 2013, when the Bitcoin price peaked at just over $1,000, he suddenly remembered his wallet:

“[I plugged] the USB stick back in to try and access the file, but the stick died. It was one of those cheap made-in-China ones.”

Just like Howells, Alex has had to watch the Bitcoin price balloon, counting the tens of millions of dollars he lost everytime a new milestone is reached.

“Worst mistake of my life. Never back up anything on a cheap Chinese-made disk or USB stick.”

Lost forever
Other stories of lost Bitcoins abound, including that of a Gizmodo editor who threw away a hard drive containing 1,400 Bitcoins in 2012. He paid $25 for the coins, at an average price of only 1.5 cents each. They would now be worth almost $15 mln.

These cases and others inspired a new study that has estimated that as many as four million Bitcoin are gone forever. The study puts the majority of the lost coins in the category of ‘out of circulation’ as of course, those coins still exist on the Blockchain, they just cannot be accessed.

One difficulty in estimating the number of “lost” Bitcoin is uncertainty over whether Satoshi is still alive and still has access to his private keys. The study’s numbers assume that Satoshi’s approximately one million Bitcoins are lost, but of course, nobody can be certain of that.

Keeping coins safe
One of the first rules for Bitcoin newbies is to keep your coins off exchanges where they are vulnerable to online threats. However, there are a number of offline threats that can also occur.

These two case studies show just how easy it is to lose a digital asset that is not stored online; from a broken hard drive to a corrupt USB, even misplacing the thing becomes a problem.

“Just like you keep some cash in your wallet, some in your bank account and perhaps the really valuable stuff in a safe, you need to manage digital currencies in the same way.”