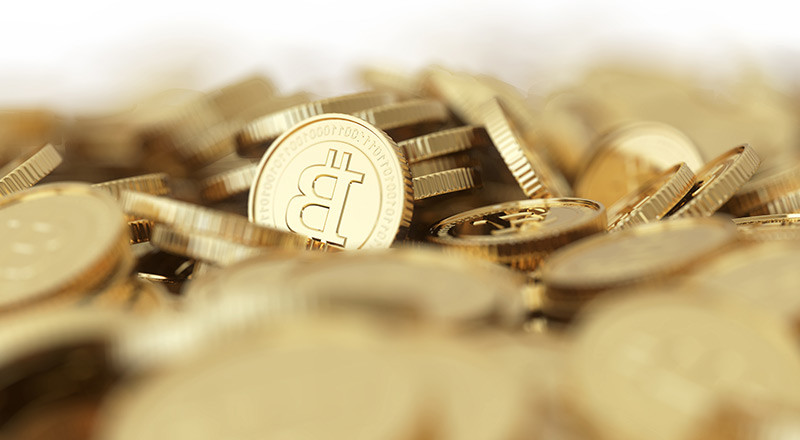 In the seven months since Bitcoin’s price peaked, it has fallen by about two-thirds. But it’s still almost three times more valuable than it was a year ago:

So what does the future hold for the world’s first and still most famous cryptocurrency? I see three basic scenarios:

No. 1. Bitcoin Triumph: Bitcoin replaces the dollar (and probably other fiat currencies as well) as the economy’s main unit of exchange. People buy pizzas, finance their mortgages and pay their rent in Bitcoin.

No. 2. Bitcoin as Gold: Fiat currency remains the main unit of exchange everywhere except in a few extremely dysfunctional economies like Venezuela’s. But Bitcoin’s market capitalization remains substantial, and it rises in value over time, occasionally experiencing large bubbles and crashes.

No. 3. Bitcoin Bust: Bitcoin is abandoned, crashing relative to the dollar and never being useful as a payment method for daily necessities.

One can observe which of these scenarios the world is moving toward by keeping track of two prices: the exchange rate of Bitcoin against the dollar (pictured above), and the dollar inflation rate, which measures the exchange rate of the dollar against a basket of goods and services. If Bitcoin’s price plunges and approaches zero, it’s a clear sign the third scenario is underway. If the dollar crashes against both Bitcoin and real goods and services — that is, if Bitcoin and inflation both go to the moon — it indicates that Bitcoin Triumph is happening. And if Bitcoin rises against the dollar but inflation stays low, it means the middle scenario, Bitcoin as Gold, is in effect.

I have long believed in the middle scenario. Since the total number of Bitcoins that can be created is finite, the currency is inherently deflationary, meaning it has a positive expected return, like gold. Finance theory implies that an asset with a high expected rate of return should also be volatile, which makes it not very useful as money. No one wants to see the value of their paycheck get cut in half between payday and grocery day. But it also seems unlikely that interest in Bitcoin will ever die out, especially given its usefulness in the black-market economy. So my prediction is that Bitcoin will stick around, experiencing repeated bubbles and busts, but slowly gaining in value. That is why I personally still own some Bitcoin.

So far, the Bitcoin as Gold scenario has been borne out by the data. As pictured above, Bitcoin has risen in price even after taking the recent bubble into account. But inflation has been low and steady, showing that people are not abandoning fiat currency either:

All money works via trust — you have to trust that the person paying you in a transaction won’t send you fake money, or somehow take the money back after you give them the goods. Banks, which certify fiat money transactions, have built up a large stock of trust over time, so each new transaction is very cheap to perform — to pay someone a dollar, you just have a widely trusted bank mark your account down by $1, and the other person’s up by $1, and you trust that there will be no funny business involved. But Bitcoin runs on a decentralized network, so there’s no trusted bank — in other words, trust has to be reestablished each time there’s a transaction. The innovation of the blockchain represents a way of doing this via a distributed network of competing players, who get a reward for certifying the transaction faithfully.

But Budish notes that reestablishing trust every time there’s a transaction can get very expensive. If you devote a huge amount of computing power to dominating the blockchain, you can create fake Bitcoin transactions, thus stealing things from people without paying them. Budish shows that in order to prevent this from happening, the payoff for the blockchain players has to be high relative to the value of the attack. In other words, the more there is to gain from an attack, the more each Bitcoin transaction costs.

The value of using a Bitcoin attack to steal things is related to the size of the largest Bitcoin transaction you can make, so this means that in order to keep Bitcoin usage costs low, transactions have to be kept small — which makes paying for things cumbersome and slow.

Even worse, you can attack Bitcoin in order to sabotage and destroy it — perhaps so that your own cryptocurrency or fiat currency can gain popularity in its stead. Budish conjectures that the value of this kind of sabotage could potentially be enormous — comparable, in fact, to the total value of Bitcoins in existence.

And if he’s right, it means that Bitcoin as a whole can never get very valuable. If it does, it either becomes way too expensive to maintain (because it consumes electricity), or it becomes vulnerable to sabotage by a rival. If Budish is right, it means that Bitcoin’s total value has an upper limit. And once people realize that, they’ll abandon the cryptocurrency, leading to the Bitcoin Bust scenario.

So far, Budish’s apocalyptic scenario hasn’t come to pass, even though Bitcoin’s market capitalization briefly surged above $300 billion in late 2017. So the danger seems remote for now. But if Bitcoin is going to replace fiat money, its market value will have to reach into the tens of trillions of dollars — more than 100 times higher than anything it has attained so far. The weakness Budish has identified — the inherent cost of repeatedly reestablishing trust under constant thread of sabotage — may make Bitcoin economically unviable. If so, either another cryptocurrency will take its place, or fiat money may continue its reign as the world’s dominant monetary system.