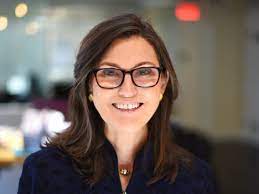 All roads seem to lead to Bitcoin (CRYPTO:BTC) for ARK Invest’s Cathie Wood these days. Last week she was adding to her existing positions in Grayscale Bitcoin Trust (OTC:GBTC) and Coinbase Global (NASDAQ:COIN). Now Wood has an even bigger crypto play in mind.

A preliminary prospectus has been filed for the ARK 21Shares Bitcoin ETF, an exchange-traded fund that will own Bitcoin tokens. Similar to Grayscale Bitcoin Trust and Osprey Bitcoin Trust (OTC:OBTC), the exchange-traded vehicle will offer investors a way to buy into the world’s most popular cryptocurrency denomination. It’s a logical evolutionary step for ARK Invest’s growing empire of future-minded funds, but there’s still a lot to unpack here.

Wood has been a strong advocate for crypto in her growth-oriented portfolios. She has made Coinbase — the world’s largest crypto-trading exchange — one of her largest holdings in just its first two months of public trading. Last week she made her largest purchase of Grayscale Bitcoin Trust in 2021.

ARK 21Shares Bitcoin ETF will give ARK Invest fans a way to buy solely into Bitcoin. It won’t track the crypto perfectly. As we’ve seen with Grayscale Bitcoin Trust and Osprey Bitcoin Trust the vehicles can trade for a lot less or a lot more than the value of their net assets. Grayscale’s trust closed at a 10% discount to its Bitcoin assets as of Monday’s close. Osprey’s vehicle was fetching a 29% market premium to its crypto.

An interesting dynamic in these trusts — and potential buyers of ARK’s proposed ETF — is that the amount of Bitcoin owned per share decreases gradually over time. The fund manager sells tokens to cover the annual expenses as the year plays out. Osprey Bitcoin Trust charges a reasonable 0.49% annual management fee. Grayscale Bitcoin Trust is at the high end with a 2% fee, likely explaining why the much larger trust is trading at a discount to its Net Asset Value. ARK 21Shares Bitcoin ETF will likely fall somewhere in the middle. The prospectus explains that the fund’s sponsor will be paid 0.95% of assets under management over the course of the year.

It will be interesting to see what the eventual launch of ARK 21Shares Bitcoin ETF means for its stake in Grayscale Bitcoin Trust. The Grayscale offering is the seventh largest holding of ARK Next Generation Internet ETF (NYSEMKT:ARKW). Will that position be replaced by ARK’s homegrown Bitcoin proxy? It will also be interesting to see what ARK 21Shares Bitcoin does for the price of the crypto itself. Given the popularity of ARK Invest in general and Wood in particular it could be a large offering taking a decent-sized chunk of Bitcoin off the market.

A lot can happen between now and when ARK 21Shares Bitcoin ETF hits the market. Right now this is obviously a positive for Bitcoin itself. It won’t make the tokens any less risky. If you’re going to invest in cryptocurrency you have to know going in that volatility will be the norm, and there are no guarantees. You shouldn’t pay much of a premium for the new fund. It’s too easy to buy into Bitcoin directly now. However, it will be a tempting option if it trades at a discount with a reasonably low management fee.