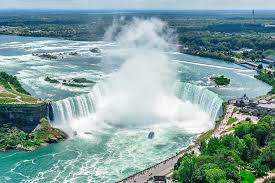 A cryptocurrency mining effort at the former DuPont plant in Niagara Falls has drawn the ire of some nearby residents, who complain about noise from the powerful fans used to cool the computers used to crunch the company’s numbers.

“I hear it makes a lot of noise at night,” City Council Chairman Kenneth M. Tompkins said. “They say it sounds like an airplane, like a jet motor.”

The heat generated by the computers is blown away by giant fans that blow gusts of hot wind across Buffalo Avenue, according to a nearby resident who asked not to be identified.

According to Mayor Robert M. Restaino, in a meeting Tuesday at City Hall, Asher Genoot, co-founder and chief operating officer of US Bitcoin Corp., was told the company can continue operating, but more quietly, while it complies with city codes.

“They are actually working on their own toward more mitigation of the sound issue,” Restaino said.

“We’ve toned some of them down,” Genoot said of the fans.

A sound barrier was installed in the past few days to muffle the noise, Genoot said.

The chemical plant at 2747 Buffalo Ave. closed in 2016. The last owner, a DuPont spinoff company called Chemours, sold the property to 2747 Buffalo Avenue LLC, which is owned by local businessman Jon Williams.

Williams said cryptocurrency mining has been going on for about three years inside an old 25,000-square-foot brick warehouse on the site. Genoot said US Bitcoin took over the lease on the location in January.

“We spent a good amount of capital cleaning up the location and bringing it up to standard,” Genoot said.

But a few weeks ago, US Bitcoin installed concrete pads on the street side of the property and stacked up what Williams said look like shipping containers stuffed with powerful computers.

The home page of US Bitcoin’s website, which features an aerial video of the falls, says it is deploying about 12,000 ASICs – “application-specific integrated circuits” – at the former chemical plant.

Chains of computers are used for the complex calculations needed to provide security for cryptocurrency transactions.

“They didn’t go through the process with the city to do it,” Williams said. “Their contention is, it’s an industrial site and they think they’re within whatever the code is.”

Williams said he visited the site Monday after hearing of the complaints, “and it was loud. When you’re on the street, you can definitely hear the fans, more than you would get from an industrial operation.”

Virtuoso called his old colleagues at City Hall and discovered the company didn’t file any site plans or environmental impact forms. He said the Code Enforcement Department followed up with a cease-and-desist order, but Genoot said it was later stayed.

Restaino confirmed US Bitcoin remains in operation, but it is required to file a site plan for city approval and comply with all other codes.

“They didn’t necessarily build new buildings. From my understanding, they put modular buildings on concrete pads,” the mayor said.

Restaino said the city had no knowledge of the company’s operations until residents complained about the noise. “That got the conversation rolling,” he said.

“We’re here to work with the city. We want to revitalize it,” Genoot said. “We spent well over seven figures on jobs,” referring to electrical and construction workers who installed the computer equipment.

Williams said the plant is still directly wired into the region’s electrical grid, as it was in the DuPont days, and that’s the source of power for the computers.

The DuPont plant was remediated many years ago, with the excavation of chemically contaminated soil. It’s still listed by the state Department of Environmental Conservation as an inactive hazardous waste site that requires long-term monitoring, including a groundwater treatment system.

The DEC inspected the site Nov. 15, but no violations of state regulations were found, according to a DEC response to questions from The Buffalo News.

“The containers are placed on concrete pads and surrounded by crushed stone,” the response said. “DEC’s visit to the site did not note any dust generated during activities observed.”

“This isn’t an air issue or an environmental issue. It’s a city ordinance issue,” Williams said.

Genoot said he’s spent time walking the streets to talk to nearby residents and businesses, and their reaction to the project has been overwhelmingly positive.

But he said the company also has plans to open locations elsewhere in the United States. “We’re not going to deploy more and more capital unless we have the support of the community,” Genoot said.

Via: The Buffalo News