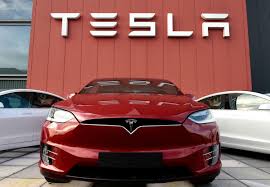 Tesla now accepts bitcoin as payment for its cars in the US, CEO Elon Musk announced on Twitter. The option to pay using the cryptocurrency now appears on the company’s US website, where it’s available alongside the traditional card payment option. Musk said that the option to pay with bitcoin will be available to other countries “later this year.”

As well as confirming the availability of the new payment option, Musk offered some details on how Tesla is handling the cryptocurrency. “Tesla is using only internal & open source software & operates Bitcoin nodes directly,” he said in a followup tweet, “Bitcoin paid to Tesla will be retained as Bitcoin, not converted to fiat currency.”

Pay by Bitcoin capability available outside US later this year

Tesla lays out how the bitcoin payment process works in an FAQ on its site, where it notes that users will have the option of scanning a QR code or copying and pasting its bitcoin wallet address to initiate the payment. It adds that trying to send any other form of cryptocurrency to its wallet means it “will not receive the transaction and it will likely result in a loss of funds for you.” According to Tesla’s bitcoin payment terms and conditions, its cars will continue to be priced in US dollars, and customers who choose to will pay the equivalent value in bitcoin. Tesla estimates that a $100 deposit paid today equals 0.00183659 BTC, for example.

Tesla’s terms and conditions also caution that customers need to be careful when inputting both the bitcoin address and amount to be paid. It notes in all caps that “bitcoin transactions cannot be reversed” and “if you input the bitcoin address incorrectly, your bitcoin may be irretrievably lost or destroyed.” Customers are also responsible for directly paying all bitcoin transaction fees associated with their purchase, and Tesla warns that although bitcoin payments typically take less than an hour to complete, this can extend to up to “one day or more.” And because of bitcoin volatility, Tesla warns that the value of any refund made in bitcoin “might be significantly less” than the value of bitcoin relative to US dollars at the time of purchase.

Tesla announced its intention to start accepting bitcoin as payment a little over a month ago in its annual 10-K report, when it said it would be adding the option in the “near future.” In the same filing, the company said it had also invested a total of $1.5 billion in the cryptocurrency. The news sent the price of bitcoin up to over $43,000, an all-time high at the time. As of this writing, 1 bitcoin is now worth a little over $56,000.