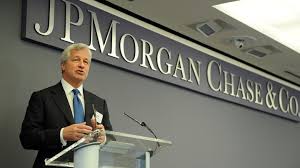 JPMorgan Chase (NYSE:JPM) could become the biggest U.S. bank to embrace cryptocurrency as an asset class as early as this summer with the launch of an actively managed Bitcoin (CRYPTO:BTC) fund. While reports of the bank’s plans and timelines have not been confirmed on the record by JPMorgan, the sources seem to be consistent and credible.

Here’s how JPMorgan is changing its tune on Bitcoin and hopping on the BTC fund bandwagon in a different way — and why it matters for crypto investors.

JPMorgan CEO Jamie Dimon has made his disdain for Bitcoin no secret. As recently as 2017, Dimon called Bitcoin a fraud. He even predicted that “someone is going to get killed” in its wake. While Dimon still isn’t the cryptocurrency’s biggest fan, JPMorgan has since started planning a Bitcoin fund for a limited number of its private wealth clients. Client demand for Bitcoin has simply forced JPMorgan into action, just as the bank predicted it would eventually do — despite its CEO’s opinion.

The big difference between JPMorgan’s proposed Bitcoin fund and most other existing (or proposed) Bitcoin funds is active management. This distinction means that JPMorgan will professionally manage the fund for a fee, with the end goal of achieving higher returns than a straight investment in Bitcoin or a passively managed Bitcoin ETF would attain.

Most other Bitcoin funds (including well-known Grayscale Investments’ massive Bitcoin fund) behave more like exchange-traded funds (ETFs), meaning that their prices move in direct correlation with the market without fund management intervention. JPMorgan would have to time the market incredibly well to prove that its active management of Bitcoin can outperform its passive market counterparts.

Grayscale and other newly proposed ETFs from major U.S. banks are caught in a race for SEC approval to be the first American Bitcoin ETF. Canada’s recently approved Bitcoin ETF and the involvement of big-name U.S. banks in ETF applications have put pressure on the SEC and raised expectations for approval in the near future.

So why the rush for a Bitcoin ETF anyway? Simply put, they are easier and more convenient than a direct investment in Bitcoin, especially for investors who are not totally comfortable in a crypto exchange. With a Bitcoin ETF, an individual can invest in the asset through their traditional market exchange without worrying about complex security issues like protecting digital wallet passwords. Unfortunately, early investors in Bitcoin have lost hundreds of millions of dollars in digital wallets with forgotten passwords.

JPMorgan does not seem to expect any regulatory trouble launching its fund by this summer. Meanwhile, the SEC has delayed any decisions on Bitcoin ETFs until this summer at the earliest, setting any and all Bitcoin ETFs most likely behind JPMorgan’s fund in timeline.

I predict that it will be more cost-efficient for almost all investors to buy Bitcoin directly or through a no-fee ETF and keep an eye on its price fluctuations. While JPMorgan hasn’t revealed any fee structure yet, actively managed funds usually involve steep costs (compared to ETFs or direct investments) because the funds manage the buying and selling of several different assets — not just one.

Active management of Bitcoin, as opposed to active management of an entire portfolio of varied cryptocurrency assets, is a unique and new concept in the crypto market. But this doesn’t necessarily mean it will outperform more varied actively managed crypto funds or even Bitcoin itself. Still, the fund’s existence will be important for the overall maturity of the crypto market.

If I were to buy more BTC, I would likely do it before this summer with a plan to hold for the long term, since Bitcoin ETF approvals are likely to make headlines and increase trading volume. The approval of these funds from major banks and the ensuing heightened demand for Bitcoin will likely raise the crypto’s price in the long run, spurring further acceptance of Bitcoin as an asset class. With that said, the crypto market is unpredictable and notoriously volatile. As always, only invest an amount that you’re willing to lose in risky cryptocurrency assets.

This article represents the opinion of the writer, who may disagree with the “official” recommendation position of a Motley Fool premium advisory service. We’re motley! Questioning an investing thesis — even one of our own — helps us all think critically about investing and make decisions that help us become smarter, happier, and richer.