Bitcoin’s firm uptrend throughout 2020 has now led it to reach a key near-term resistance level that its bulls are currently contesting. This has resulted in mixed feelings amongst analysts as to where BTC will go next.

According to one prominent analyst, if bulls are able to push the cryptocurrency above this resistance level in the near-term, it will likely spark a violent upwards movement that sends it straight towards $9,500, which will put it just a stone’s throw away from $10,000.

A rejection at $9,000, however, could spell serious trouble for the cryptocurrency, and signal that another firm mid-term downtrend is imminent.

Bitcoin Pushes Up Against $9,000 as Bulls and Bears Reach an Impasse

At the time of writing, Bitcoin is trading up marginally at its current price of $8,900, which is around where it has been trading at for the past 24-hours.

The cryptocurrency has tapped the $9,000 region on a few occasions over the past few days, with each visit to this level being closely followed by a slight sell-off that leads it down towards its current price levels.

If Bitcoin is able to push above $9,000, FlibFlib – a highly respected cryptocurrency analyst on Twitter – explained that he will be closely watching for a movement up towards its previous weekly resistance at $9,555.

“Previous weekly resistance @$9555 – Bring it home,” he said while referencing the chart seen below.

64 people are talking about this

If FlibFlib’s analysis does prove to be valid and Bitcoin pushes towards $9,500, it could mean that its recent uptrend will extend significantly further.

The reason why BTC’s near-term price action is so critical for determining its future trend is that it is currently pushing up against resistance on its weekly chart, and a rejection here could mean further losses are inbound.

“$BTC: If this is a bear market rally, it ends this month. If it’s a bull market rally you better be positioned. The monthly close is gonna be fun to observe, it’s either gonna be shattered bear or bull dreams,” DonAlt, another popular crypto analyst on Twitter, explained in a recent tweet.

If this is a bear market rally, it ends this month.
If it’s a bull market rally you better be positioned.

The monthly close is gonna be fun to observe, it’s either gonna be shattered bear or bull dreams. 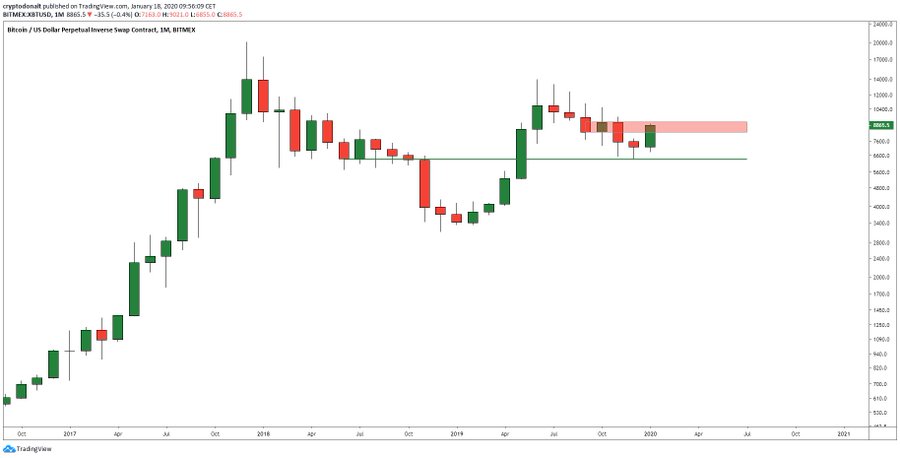 272 people are talking about this

Because of this, how Bitcoin responds to its resistance at $9,000 could be the single key factor that sets the tone for just how significant this rally will be throughout the course of the new year.