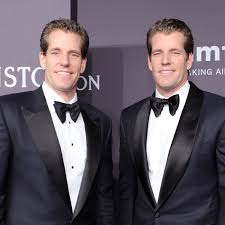 Tyler and Cameron Winklevoss described buying a large amount of Bitcoin now as the “trade of the century” and predicted the cryptocurrency will soar 30-fold from its current price of about $19,000.

The twins, who famously accused Facebook CEO Mark Zuckerberg of stealing their idea when he launched the social-media company, are Bitcoin billionaires and run a digital-currency exchange named Gemini. They made the comments during a a Real Vision interview filmed on December 7 and released on December 11.

The pair also compared Bitcoin to a social network, predicted collectibles will increasingly be bought and sold on blockchains, and criticized the Federal Reserve’s opacity.

Here are their nine best quotes from the interview, lightly edited and condensed for clarity:

Cameron: “We are just not going to run away with your Bitcoin. It just does not make any sense for us to do that.”

Cameron: “The mainland is legacy finance, crypto is an island. We want to see an inversion where crypto becomes the mainland and legacy finance is just this dinosaur that is slowly fading away

Tyler: “The comic books you grew up reading, the baseball cards you collected, those are now being put on a blockchain because people are starting to realize their physical nature is actually not a feature, it is a bug. It is not about the physical nature. It is the scarcity. It is the uniqueness.”

Tyler: “I do not know who said compound interest is the eighth wonder of the world. Albert Einstein or Warren Buffett, maybe it was Gandhi, I do not know” – the quote is commonly attributed to Einstein.

Tyler: “How do these conversations go behind the curtain? It is like the Wizard of Oz. The Fed, it is a mystery, and there is no clarity on how the decision is made. Wave the magic wand, Jerome Powell says this or that. It is insanity.”

Tyler: “The dominoes are starting to fall, and eventually it is going to be a central bank, some very smart companies, a country is going to take a huge position in Bitcoin and talk about it.

Tyler: “The trade of the century is still out there for a couple of people, a couple of hedge-fund managers. It will be as great as the George Soros breaking the pound trade” – describing the opportunity for a fund manager to buy $100 million worth of Bitcoin.

Tyler: “Our thesis is that Bitcoin rises 30-fold from here because it is digital gold, it disrupts gold.”