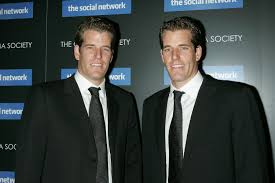 A bitcoin exchange set up by the Winklevoss twins has seen its trading volumes surge rapidly, according to tracker site bitcoinity.org, but the new company still lags behind the major players in the sector.

Cameron and Tyler Winklevoss launched the exchange on October 8 and have dubbed it the “Nasdaq of bitcoin.”

It has completed 11,176 trades in the last three weeks, according to bitcoinity.org. From 31 trades on its first day, it managed to complete over 2 thousand during last Friday’s session.

Despite the rapid increase in trading volume Gemini remains trumped by other exchanges. During the same period, other top ranking exchanges such as bitstamp completed 686,712 trades and bitfinex completed 594,747 trades. The Chinese exchange OKCoin traded over 1 million bitcoins on Friday, according to the tracker website.

However, according to bitcointy.org, Gemini ranks number 11 in a list of top 21 Bitcoin exchanges.

The bitcoin exchanges which rank better than Gemini include thebitfinex, bitstamp, coinbase, bit-x and itbit.

Gemini, is the long-awaited New York-based bitcoin exchange founded by the twins. There are currently many bitcoin exchanges available on the market which allow customers to convert physical money into bitcoins.

Michael Parsons, a banking management consultant and bitcoin adviser, told CNBC via email explain that it is not an easy process to launch an exchange. Gaining regulatory approval is a huge hurdle, he said.

“To launch an exchange you require a bank account and most banks will not deal with an unregulated entity. The exchange has to be regulated beforehand. Once you have been regulated only then will banks deal with bitcoin.” said Parsons.

Bitcoin’s price has been trending higher in the latter half of 2015. Currently the exchange rate for 1 bitcoin is $333.14.

The Winklevoss twins are Olympic-rowers-turned-technology-entrepreneurs who first became famous after suing Facebook founder Mark Zuckerberg, claiming he stole their idea.

While the new currency has received criticism for its role in exchanges such as online black market Silk Road, the brothers contend they have established sufficient safeguards to unlock its potential.

According to the Gemini founders, the customers’ digital assets (bitcoin) are held offline, in an air-gapped vaulted storage system. Only a small portion of the digital assets are held in the online wallet known as the “hot wallet.”

Bitcoin is often associated with illegal activity and the dark corners of the internet. But the Winklevoss twins believe their new exchange will help investors get involved with the digital currency safely and legally.