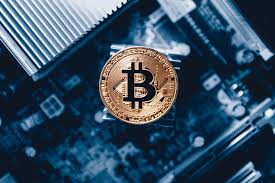 The bitcoin boom is back on.

The cryptocurrency has risen 46% this year, pulling back above $10,000 this week for the first time since September.

The rally is far from over, according to MKM Partners chief market technician JC O’Hara.

“When we look at cryptos as a whole, they tend to trade in two distinct phases. The first being dormant consolidation, which is followed by phase two, which is a high-momentum phase,” O’Hara told CNBC’s “Trading Nation” on Wednesday. “And when you look at bitcoin we’re starting to see signs that the dormant consolidation from the second half of last year is slowly starting to change in terms of positive bullish momentum here.” 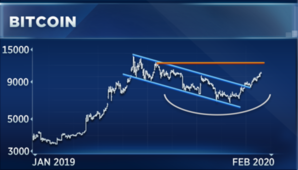 Bitcoin reached a near-term bottom in December and has been on a steady rise since then.

“We broke out of the downward sloping trend channel. We’re breaking above the $10,000 psychological level, and we’re of the opinion that positive momentum will continue to follow positive momentum. So that’s why we think in the short term we could see $12,000 on bitcoin,” O’Hara said.

Bitcoin was trading at $10,100 on Thursday morning. A move to $12,000 implies 18% upside from current levels. It briefly topped that level last summer.

Mark Tepper, president of Strategic Wealth Partners, is dipping a toe into bitcoin but isn’t ready to jump all the way in.

“Overall, we’re seeing investors just continue to diversify away from traditional stocks and bonds towards alternatives. Bitcoin could fit into that alternative sleeve, but I still think it’s a little too early,” Tepper said during the same segment. “The fact that it’s becoming significantly less volatile, if you could imagine that, over the last two years is definitely helping its case.”

Tepper holds bitcoin but isn’t a believer yet. He says if it shot higher, “we’d be happy but if it goes to zero it’s not going to change our lives.”

“In my opinion, not an investment just yet still a speculative play,” said Tepper.