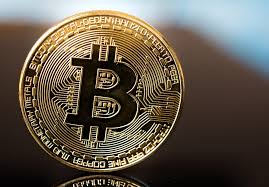 Bitcoin’s (BTC) price has been showing extreme levels of volatility as it consolidates under a key level of $10,000. Previously, the price dropped to as low as $8,100 on May 10, merely a day before the highly anticipated mining rewards halving.

Following the 20% drop, traders remain divided on where the Bitcoin price would go next with some traders believing that BTC could immediately see an upsurge to the $14,000 to $15,000 resistance area.

Historically, when Bitcoin’s price saw an extended rally, it went past key resistance levels with ease. For instance, it took BTC 28 days to increase from $8,000 to $20,000 in December 2017. In June 2018, Bitcoin’s price rose from $7,500 to $14,000 in merely three weeks. So, BTC’s price has the tendency to increase by a large margin in a short period of time, especially when it’s met with huge demand from retail investors.

However, other traders foresee Bitcoin’s price testing lower support levels after its fall to $8,100. Given that Bitcoin fell post-halving in the last two halvings, technical analysts expect BTC to retest the mid-$6,000 region at the lowest.

The primary bullish scenario following Bitcoin’s block reward halving is a breakout of a major trendline above the $14,000 mark — which dates back to 2017. In the past year, Bitcoin’s price moved within a large multi-year cycle established by its record high at $20,000 and its June 2019 peak at $14,000. Every time Bitcoin’s price got close to breaking out of the range, it was met with a fierce rejection.

Bitcoin’s price in a multi-year cycle dating back to December 2017. Source: Satoshi Flipper

If the current Bitcoin momentum is overwhelmingly strong and breaks out of the multi-year trend, there is a possibility that it will trigger a major uptrend. Cryptocurrency trader Satoshi Flipper said:

“I’m still betting on breaking through the upper trend line resistance and price action heading north. No way are my convictions changing because some clowns sold their BTC and price tanked 1 day.”

A Bitcoin technical analyst, known as “Galaxy,” echoed a similar prediction, saying that the last time BTC saw seven consecutive weekly candles, a 160% increase followed. In the last seven weeks, Bitcoin’s price continued to increase without major pullbacks — which last happened in December 2018. Following the seven weeks, the price surged from $3,100 to $14,000 in merely seven months by June 2019. Galaxy said:

“Look what happened the last time we had 7 consecutive green weekly candles. We had a ‘doji’ candle, followed by a 160% increase. By the looks of it, we’re in for a ride.” 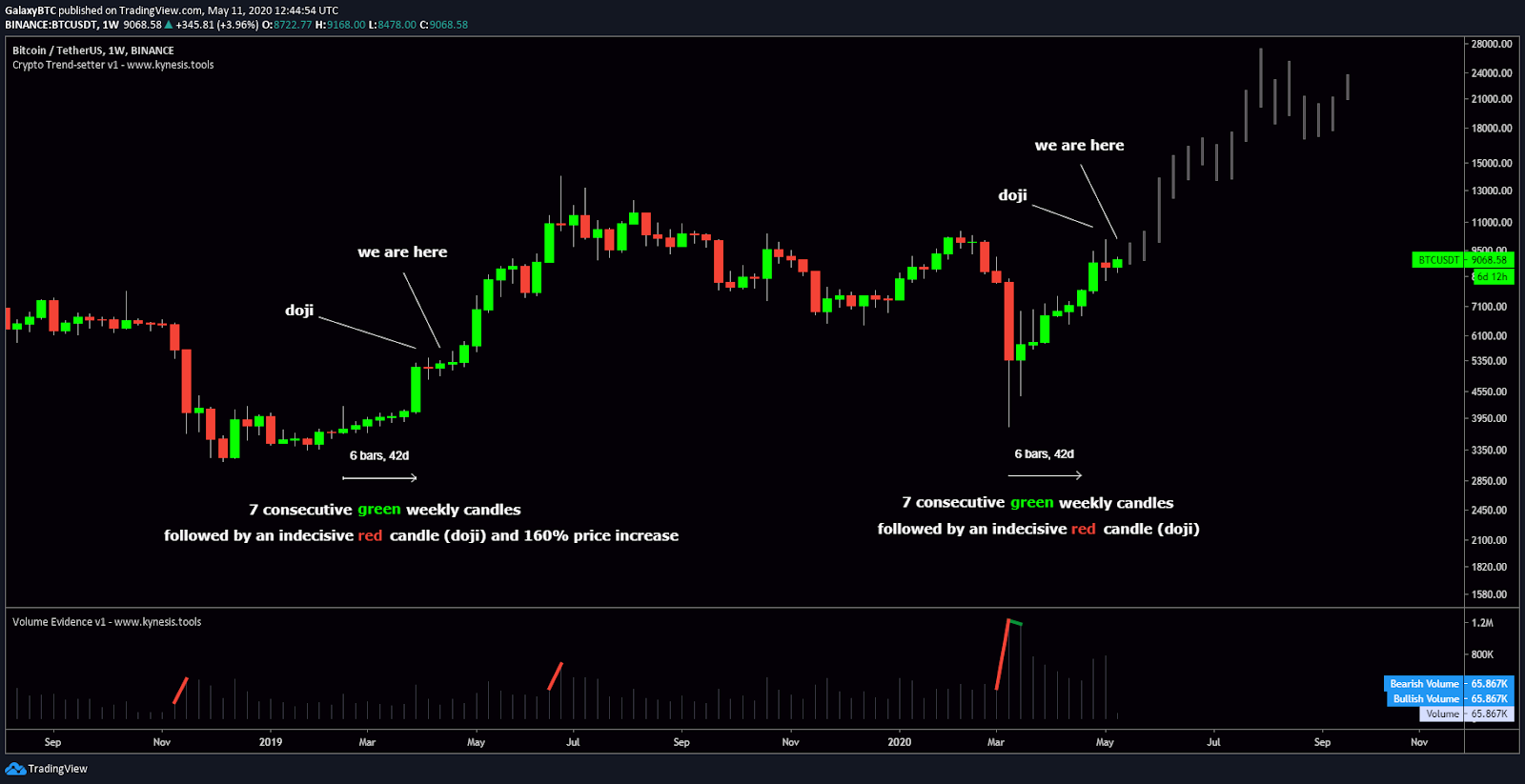 Bitcoin’s optimistic medium- to long-term trend based on fractals and technical indicators is further fueled by the entrance of high profile investors into the cryptocurrency market. In an interview with CNBC, billionaire hedge fund manager Paul Tudor Jones said that the trust in Bitcoin will increase as time passes. He emphasized that the asset is merely 11 years old and that it is in an early phase of growth. Jones said:

“When it comes to trustworthiness, Bitcoin is 11 years old. There is very little trust in it. We are watching the birth of a store of value. Whether that succeeds or not, only time will tell. What I do know is that every day that goes by and Bitcoin survives, the trust in it will go up.”

Given the influence of Jones in the financial market, there is a possibility that other institutional investors may follow his lead to invest in Bitcoin. Grayscale already recorded more than $380 million in institutional investments in the first quarter of 2020, which supplements the bullish scenario of Bitcoin after the halving.

The bearish scenario for BTC in the short-term

In the short-term, several cryptocurrency traders anticipate Bitcoin’s price to drop to as low as $6,500. There are strong arguments to be made for a temporary bearish price trend after the halving. A confluence of Bitcoin nearing a major overhead resistance at $10,500 and historical data suggest a steep fall following a halving.

According to Bitcoin trader Dave the Wave, if the price of BTC continues to move based on a fractal taken from 2019, it is likely to see a pullback to the $6,000 region:

“If the fractals continue to hold, time to start thinking about consolidation levels. 50% consolidation in real terms would put BTC in the 6K range. All good for going forward.”

A drop to $6,400 would solidify the mid-$6,000 support area, strengthening the Bitcoin rally for a more robust extended uptrend in the second half of 2020. A cryptocurrency trader, known as “Wolf,” raised a similar concern. Bitcoin’s price has moved within an ascending triangle pattern since its abrupt recovery from $3,600 on March 12.

The sudden price drop to $8,100 on May 10 led the formation to break, technically leaving Bitcoin vulnerable to a severe correction. At the time, cryptocurrency investor Scott Melker said that the market observed a strong shakeout. Melker added:

“That was the highest hourly volume candle since the epic crypto doom fest on March 12th. I won’t be rushing into a position until this shakes out a bit. That was some real deal selling we just witnessed.”

Bitcoin at risk of breaking down from an ascending triangle. Source: Wolf

A pullback from the $10,000 level would provide some stability into the market after a 160% rally within a two-month span. Bitcoin’s price rose by nearly threefold with barely any corrections that left technical analysts worried about the sustainability of the upsurge.

In the short-term, Bitcoin’s price faces two major variables: a sudden inflow of capital from institutional investors and capitulation from small miners. Considering that institutional investors allocated hundreds of millions of dollars into Bitcoin in the first three months of the year, the probability of a larger amount of capital entering the market after the halving is high.

Barry Silbert, the CEO of Grayscale, said in a tweet that his investment firm reached $3.7 billion in assets under management on May 9, an all-time high for the company. Grayscale said in its Q1 report:

“Hedge Fund Investment Gains Steam: 88% of inflows this quarter came from institutional investors, the overwhelming majority of which were hedge funds. The mandate and strategic focus of these funds is broadly mixed and includes Multi-Strat, Global Macro, Arbitrage, Long/Short Equity, Event Driven, and Crypto-focused funds.”

In contrast, a variable that may cause a Bitcoin downtrend in the near-term is the possibility of capitulation by small and overleveraged miners. After the halving, the breakeven cost of mining will hover between $12,500 and $15,000, depending on the difficulty of the mining as the TradeBlock report explained at the start of 2020.

While the cost of mining Bitcoin is likely to be lower than most estimates, even at the lowest forecast of $12,525, miners will be operating at a loss for at least several months. The relatively low price of Bitcoin opens BTC up for a miner capitulation, forcing small miners to sell BTC. Digital asset manager Charles Edwards tweeted:

“This will be the most brutal Bitcoin Halving in history. Production cost is about to double to $14,000. 70% above the current price. Last halving, price was just 10% below Production cost, and Price & HR collapsed -20%. Without FOMO now, expect a big miner capitulation. 30%+”

Both variables are not likely to affect Bitcoin’s price in a meaningful way in the immediate-term, as they represent extreme scenarios. BTC is now at a critical juncture that may decide its price trend over the next 12 months, and generally, traders remain long-term optimistic about the price trend of BTC.