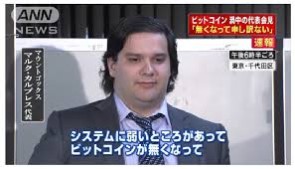 On Sunday afternoon, in a central Tokyo detention centre, Japanese police began questioning Mark Karpelès, founder and former head of Mt Gox, the bitcoin exchange platform that collapsed last year.Police, who arrested France born Mr Karpelès on Saturday, allege that he manipulated the Mt Gox computer system to inflate his own company account. They claim he made an illegal entry to the system in February 2013 and increased the balance of his account by $1m.

In its heyday, Mt Gox was the world’s biggest bitcoin exchange. But the platform filed for bankruptcy last year after admitting that it did not know the whereabouts of 850,000 bitcoins then valued at about $500m. The damage to the virtual currency trading community was significant, say people who have studied the affair.

Japanese police may have arrested Mr Karpelès on the apparently narrow grounds of allegedly padding his account at Mt Gox but they hope for a broad explanation from him about the company’s collapse and the disappearance of the bitcoins. This is also a priority for enraged creditors, cyber specialists and law enforcement agencies around the world. Some people following the saga say Mt Gox may have been victim of the greatest hacking robbery of the digital era.

The Tokyo metropolitan police department said on Saturday it suspected that Mr Karpelès “had illicitly inflated the balance of an account” under his name by making Mt Gox’s computer system remember transaction records that are believed to be false.

“He [Mr Karpelès] created false information that $1m had been transferred into the account even though there was no such fact,” it added. The connection between these allegations and Mt Gox’s missing bitcoins was unclear.

Japanese police can question Mr Karpelès for up to 20 days from Sunday before having to release or charge him. Mr Karpelès, his lawyers told Japanese media, will deny any wrongdoing. The lawyers did not respond to requests for comment by the Financial Times.

The alleged crimes in the Mt Gox affair are hard to pin down because of the absence of specific Japanese laws about virtual currencies, say people close to the police inquiry, which began last year. At best, say the authors of one independent report into Mt Gox’s collapse, a trial involving Mr Karpelès may shed light on a company that was run chaotically by a manager with a low regard for security.

An online poster claiming to be Ashley Barr, the first employee hired by Mr Karpelès to work at Mt Gox, used the Reddit discussion board on Saturday evening apparently to break a longstanding non-disclosure agreement and allege that his former boss had been an incompetent and lavish spender of company money. Mr Karpelès was also accused of being prone to unintelligible retorts when questioned about Mt Gox’s finances.

At one stage of Mt Gox’s development, wrote Mr Barr, Mr Karpelès’s personal bank account and that of the company were one and the same.

“I felt Mt Gox was an RPG [role-playing game] to Mark, as he didn’t quite grasp the reality that the money being in [sic] deposited into his bank account meant more to other people than just numbers on his screen,” Mr Barr wrote

Some people say Mt Gox’s heyday may have been an illusion. Kim Nilsson, chief engineer at WizSec, a Tokyo-based consultancy that produced the most authoritative independent report on Mt Gox’s collapse, calculates that the company had been insolvent for nearly a year before it filed for bankruptcy.

The missing bitcoins, Mr Nilsson says, were almost certainly stolen from Mt Gox over a period of years.

The chief engineer adds that he has no evidence the bitcoins were stolen by Mr Karpelès and does not identify a suspect. Trading patterns gleaned from a central ledger that tracks bitcoin movements between exchanges suggest a methodical theft by someone with access to Mt Gox’s digital vaults, he says.

Many aspects of the way that Mr Karpelès ran the company, adds Mr Nilsson, laid it open to attacks by hackers. “If you assume that this was a sane company, then nothing makes sense,” he says.

The number of missing bitcoins was reduced from 850,000 to 650,000 after Mr Karpelès said last year he had recovered 200,000 from a previously overlooked part of the Mt Gox computer system.

The Japanese police’s exasperation over their struggle to track down the missing bitcoins has begun to show, in leaks to local media. They have probed this case for more than a year and its complexities have proved challenging.

The cyber crime and white-collar crime units of the Tokyo metropolitan police have clashed, according to insiders.

The apparent list of allegations against Mr Karpelès ballooned after his arrest.

In addition to the alleged $1m inflation of his own account, Japanese media reported on Sunday that police suspected Mr Karpelès of illegally siphoning about Y1.1bn of customer deposits at Mt Gox into other companies he owned.

Japan’s state broadcaster, citing unnamed police officials, produced an elaborate diagram to imply that, at its heart, the Mt Gox affair was essentially another Ponzi scheme.

But Mr Nilsson and others say it would be a pity if the Mt Gox saga ended in a narrow prosecution based on Saturday’s police allegations. In reality, they add, Mt Gox may represent the first in an entirely new genre of sophisticated cyber crime.