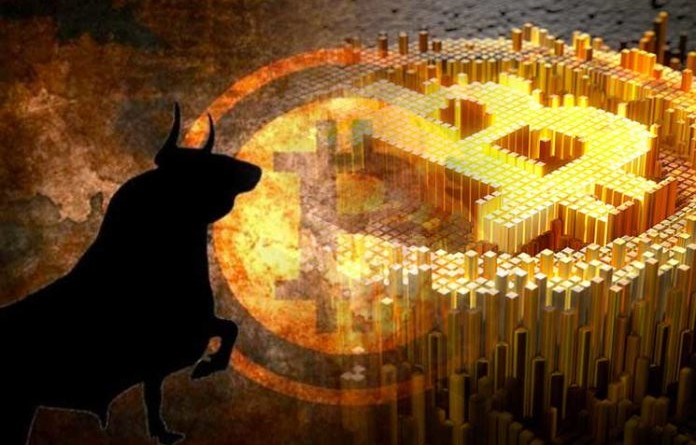 Bitcoin risks a further sell-off if the bulls’ defense of $3,700 fails to produce quick recovery.

The sell-off was likely driven by the unwinding of long positions (profit taking), as the notional value of short positions fell 12 percent to 11-month lows, according to Bitfinex. Notably, the long-short ratio is still holding near the high of 1.5 seen earlier this month, signaling bullish market sentiment. Further, the bullish higher low of $3,550 set on Feb. 17 is intact.

Therefore, the path of least resistance is still to the higher side. So far, however, the bulls have not taken advantage of better entry levels offered by Sunday’s price drop, leaving the cryptocurrency directionless around $3,800.

So an upward move is needed soon, as the short duration technical studies are turning bearish and a break below $3,700 could yield deeper losses.

BTC seems to have carved out a bear flag on the hourly chart, which often ends up accelerating the preceding bearish move.

An hourly close below $3,764 – the confluence of the lower edge of the flag and the rising trendline – would confirm a flag breakdown and, with RSI back in the undersold territory (50-30), there is enough room for a drop to levels below $3,400 post-breakdown.

The chart also shows a bearish crossover between the 50- and 200-hour MAs, which would gain credence if the cryptocurrency fails to pick up a strong bid in the next few hours.

A UTC close below $3,714 would validate both the downward sloping 100-day moving average (MA) and Sunday’s bearish outside day candle and confirm a short-term bullish-to-bearish trend change. That could be followed by a drop to $3,531, a bullish higher low carved out on Feb. 14.

The probability of BTC witnessing a bearish close below $3,714 would rise if prices confirm a flag breakdown with a move below $3,764 in the next few hours.