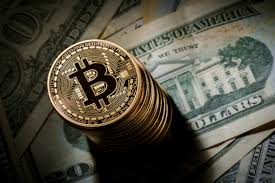 Bitcoin has come to within touching distance of $10,000 this week, reaching its highest since October last year, but has failed to step over the key threshold.

The bitcoin price has climbed by almost 40% so far this year, reaching $9,780 per bitcoin on the Luxembourg-based exchange Bitstamp yesterday, as traders and investors eagerly look towards May’s upcoming halving event—amongst other developments.

However, the bitcoin price is being handily outpaced by almost every other major cryptocurrency so far this year—with some clocking three-digit percentage gains in the first few weeks of 2020.

Among the top ten biggest cryptocurrencies by value, bitcoin SV, an offshoot of bitcoin cash, which is itself an offshoot of the original bitcoin, has recorded the sharpest rise so far this year, rising 209%.

Bitcoin SV, which broke away from bitcoin cash in 2018 and is controlled by the controversial Australian computer scientist Craig Wright, rocketed higher last month following reports Wright has acquired documents that might help prove he had a hand in bitcoin’s creation a little over 10 years ago.

New Energy Options Can Transform An Industry And A Nation

How Esports Are Fueling The Data Economy

The claim has been widely ridiculed by the bitcoin and cryptocurrency community and Wright has so far failed to backup his claims.

“While prices appear to be increasing and substantial growth is happening in terms of institutional product offerings and regulatory clarity, there are still significant unknowns hovering over the market at large,” researchers at bitcoin and crypto trading platform SFOX said this week, leaving their market outlook at “neutral.”

Bitcoin remains the prime cryptocurrency market mover, however, with its dominance, a measure of bitcoin’s value compared to the wider crypto market, at 64.2%—up from just over 50% in February 2019.

“It’s not clear whether bitcoin will function as a safe haven in coming geopolitical turmoil; it’s not clear how much institutional appetite is actually there for all the institutional crypto offerings being launched; and it’s not clear what impact the upcoming bitcoin block reward halving, just four months away, will have on the price of bitcoin,” SFOX analysts added.

All other top ten cryptocurrencies, excluding stablecoin tether, have also risen even further than bitcoin so far this year.

The second most valuable cryptocurrency, ethereum, is up 60%, while the third, Ripple’s XRP, is up 47%.

Further down the rankings, top 20 cryptocurrency dash, which has found a niche as a payments alternative in South America, has climbed 195%.