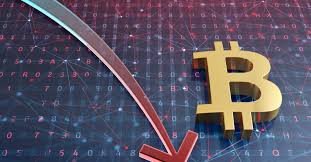 Friday, Nov. 23: Crypto markets are facing another significant decline today, with Bitcoin (BTC) seeing another yearly low, and Bitcoin Cash (BCH) dropping almost 50 percent over the past 7 days, according to data from CoinMarketCap.

The major 20 cryptocurrencies by market cap are all red this Black Friday, with some altcoins losing more than 10 percent over the past 24 hours at press time.

Bitcoin dropped below the $4,200 price point to as low as $4,195 earlier today, breaking the lowest threshold for the first time since September, 2017. As of press time, the major cryptocurrency is down around 4.5 percent and is trading at $4,291. Following a massive decline last week, Bitcoin is down around 23 percent over the past 7 days.

Bitcoin’s dominance on the markets accounts for about 54 percent as of press time, according to CoinMarketCap.

Bitcoin Cash, which some claim caused the recent crash in markets with its recent hard fork, is down almost 50 percent over the past 7 days. Trading at $204, the coin is seeing a drop of 6.5 percent on the day.

Stephen Innes, head of trading at Singapore-based capital market service OANDA Asia Pacific, told Bloomberg that there are still “a lot of people” in the market in its current state. However, the expert suggested that if Bitcoin sees a “run down toward $3,000,” the crypto market “is going to be a monster,” with people “running for exits.”

Claiming that Bitcoin could fall to as low as $2,500 by January, 2019, Innes expressed confidence in the “other cross-asset plays,” particularly emphasizing gold:

“Gold prices are going to jump considerably higher and there’s an inverse relationship we’re starting to see with gold and coins.”

In conclusion, the expert predicted a wide pricing interval for Bitcoin in the short-term, stating that the biggest cryptocurrency could trade anywhere from $3,500 to $6,500 in the near future.

Due to the recent crash in markets, the crypto industry has also seen a collapse of its cryptocurrency mining sector due to massive reductions in profits for miners. Yesterday, Cointelegraph reported on China’s crypto miners selling out crypto mining hardware by weight, rather than by unit.

On Nov. 20, major U.S. crypto mining and blockchain firm Giga Watt filed for bankruptcy, claiming that the company is “insolvent and unable to pay its debts when due,” holding assets between zero and $50,000.