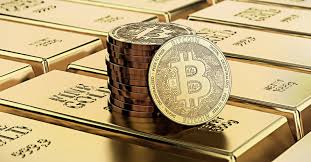 and gold may not be entirely accurate, and that the former may end up cannibalizing the latter.

Responding to a Substack post from Anthony Pompliano, a popular podcaster and a co-founder of the hedge fund Morgan Creek Digital, Saylor wrote that “it is dangerous to think that Gold & Bitcoin are similar & complementary investments. When the #Bitcoin Dragon emerges from its lair, the first thing it will eat is the Kingdom of #Gold.”

This sort of proselytizing makes sense coming from Saylor, whose billion-dollar tech company bet big on Bitcoin this past summer; MicroStrategy now has over half a billion dollars in Bitcoin. In October, Saylor tweeted that he personally holds 17,732 BTC. (That’s roughly $270 million worth, at today’s prices.)

Bitcoin’s potential as a store of value has given it the nickname “digital gold,” and many analysts remain suspicious about whether or not it’s actually viable as a transactional currency. Bitcoin prices have also been historically correlated with gold prices. Billionaire investor Mike Novogratz said as much to Bloomberg last month: “Bitcoin as a gold, as digital gold is just going to keep going higher,” he said. “More and more people are going to want it as some portion of their portfolio.”

And while Novogratz has been relatively optimistic about Bitcoin’s prospects, his comments on the relationship between Bitcoin and gold have been more cautious than Saylor’s. This past July, Novogratz suggested that Bitcoin’s volatility remains a real concern, and that he’d recommend investing much more heavily in gold

Saylor, for his part, tweeted yesterday that “Bitcoin advocates should stop apologizing for volatility,” and that, at least for one day, Bitcoin “was less volatile than NASDAQ, S&P 500, Dow Jones, Russell 2000, 10 & 30 Year Treasuries, Gold, Silver, Apple, Amazon, Microsoft, & Facebook.”

So far, Saylor and MicroStrategy’s bet on Bitcoin has paid off; the price of 1 BTC remains over $15,000. When MicroStrategy first announced its big Bitcoin buy, BTC was priced at around $11,500.