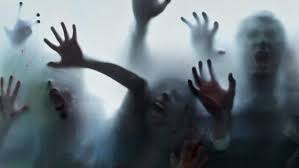 Remember that altcoin, the one you thought was going to be big and make you tons of profit? The one whose bag you bought and perhaps, are holding to this day? Yes, this article is about those altcoins that you thought were gonna get big, perhaps even becoming the next Bitcoin. Alas, most of these coins have already been forgotten and are valueless.

On a personal note, I couldn’t decide if I was going to name these altcoins “Zombie coins” or “Dead coins walking.” After all, both seem good. Eventually, I had to settle with one and it was the former.

Zombie coins – What are they?

Put simply, “Zombie coins” are those altcoins that were once in the top-10, but have been dead ever since. However, they can still be found, seemingly alive, but dead without a doubt.

Cryptocurrencies, as we know, are a new asset class. But, they follow cycles of boom and bust, just like equities. Cryptocurrencies have mostly followed Bitcoin’s cues when it comes to cycles. The last cycle started in early-2016 but ended towards the start of 2018 and in each such cycle, new altcoins have been given birth to.

Most of these altcoins promise investors the world and try to solve an ostensibly important problem(s). Soon, a hype around such altcoins builds and rumors about it taking over Bitcoin allow unbeknownst investors’ money to snowball, pushing the price of said altcoins(s).

However, reality hits hard when the cycle ends, and these altcoins crash harder than Bitcoin and become priceless. Hence, we can see how each cycle’s byproducts are these zombie coins.

Each cycle is presumed to last 4 years since the halving occurs once every 4 years. However, another approach is that these cycles are lengthening. Refer to this article for more information on Bitcoin cycles. 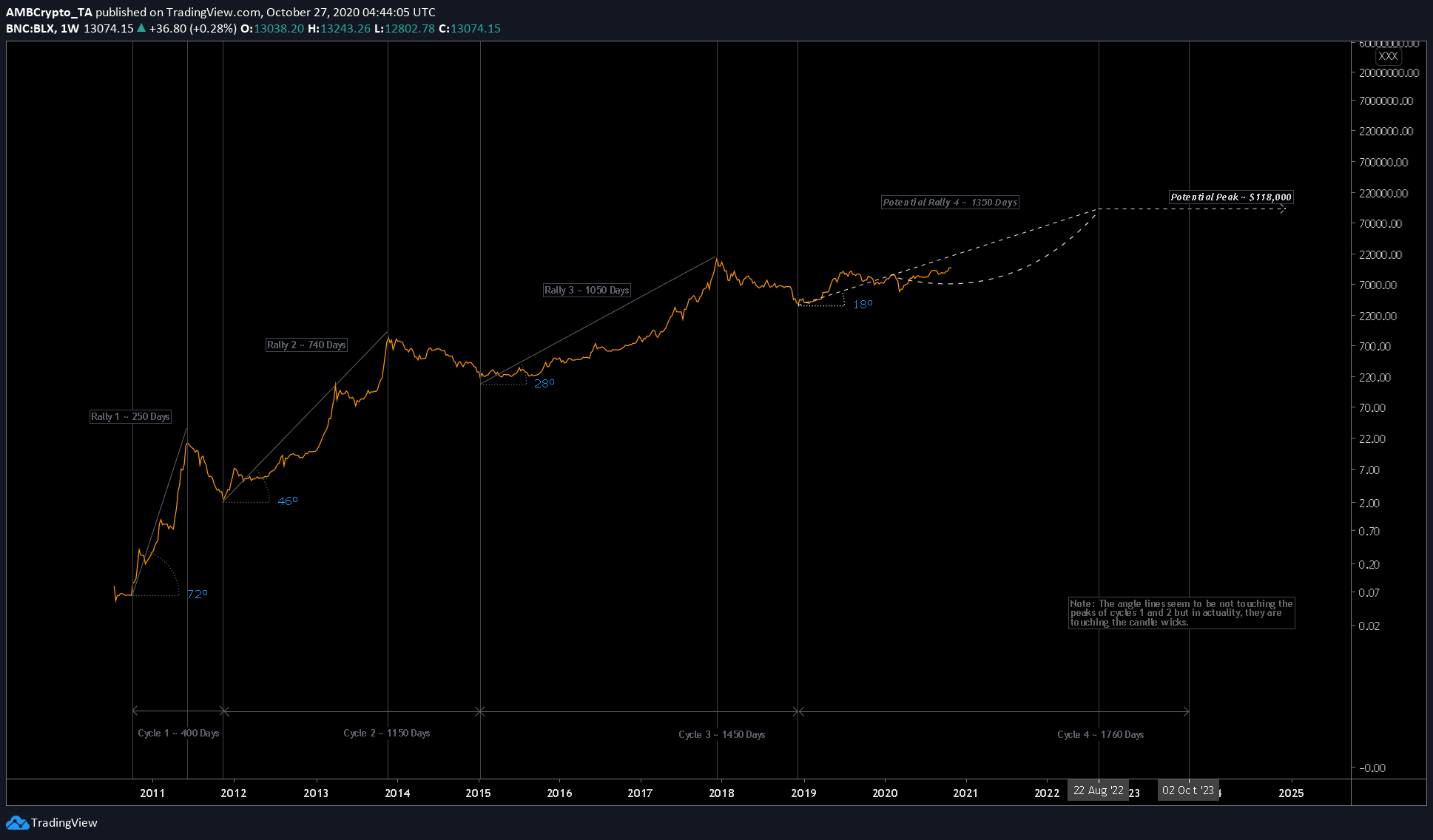 The attached chart shows how Bitcoin’s cycles are lengthening. The last cycle, if presumed to have ended in December 2018, then the next cycle will last a total of 1780 days, and we’ve already completed 38% of this cycle. So, we can assume the altcoins that we see today in the top 10 might not stay there for a long time.

Previous cycles have definitely produced enough zombie coins, hence, let’s forget the altcoins of today and look at the altcoin bags that you might still hold and are secretly expecting to pump.

Before we do that, we need criteria to identify and/or classify these altcoins that have turned into zombie coins.

Out of 218 entries [with repetition], we found about 9 zombie coins based on the above criteria. These zombie coins are NXT, Paycoin, Peercoin, Bitshares, The DAO, Omni, Banx, Auroracoin, and Namecoin. An addition to this list is a special exception of zombie coin – Maidsafecoin. This coin has about 11 appearances since 2014 and isn’t currently in the top 10.

Here’s a visual aid that shows their rank slip from being in the top to where they now stand. It is clear that all these coins noted a drastic drop in their ranks, as well as their price. 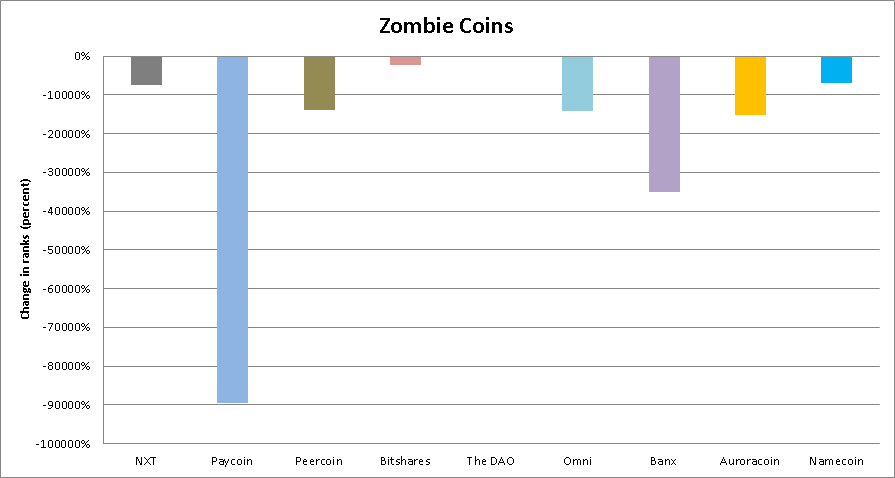 To zombie coin or to not?

This article was a fun experiment to research and write, however, the takeaway from this article is that there will not be another Bitcoin, there will always be ‘The Bitcoin’ and other altcoins. These altcoins may or may not see a surge greater than Bitcoin’s, but Bitcoin will be the only cryptocurrency that will outlive all these altcoins.

While altcoins are fun to trade and make money off of, not all are worthy of a long-term investment. Since the next cycle has 60% more to it, we can expect many altcoins to rise up and drop down. Take for example the DeFi coins like CRV, YFI, YFII, etc. – All of these had a phenomenal surge during the mania, but are rapidly dropping in value now.

If you did buy a huge bag of DeFi coins, you might be left holding them for eternity as most of these altcoins might not pump again. The best example is XRP, as pointed out by Pentoshi, XRP hasn’t had a higher high on a macro scale [weekly] for more than 2 years. 7 January 2021 will mark 3 years since a higher high and yet, we see a lot of XRP hodlers saying that the next bull run will be explosive.

These are precisely the people holding a heavy bag of XRP since the ATH of 2017.

What’s the lesson here? Well, choose your altcoins carefully and take care that you do not get too attached to it.